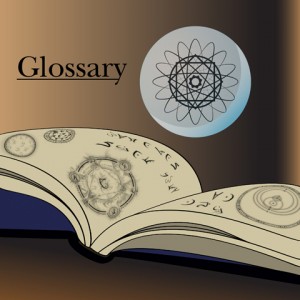 Ganzfeld
German for “complete field,” refers to a technique used to cause sensory deprivation.

Grounding
Process of attaching yourself to some form of anchor before engaging in energy work. For example, the act of taking unwanted energy out of you and sending it to the ground.

Haunting
Instance of a Ghost connecting itself to a person or place.

Internal Flow
In Scanning, the internal flows are representative of stuff that only directly affects them, not to say it wouldn’t affect you passively, as in mood changes or etc, but it’d geared toward them. They aren’t the most important, but should not be ignored.

Latent
Someone with potential that has yet to be expressed.

Levitation
Floating without outside aid.

Link
A.K.A. Bond; Connection between two or more individuals, objects, and/or places.

Linking
A.K.A. Bonding; Process of creating a Link/Bond between two or more individuals, objects, and/or places.

Lucid Dreaming
Being aware that one is in a dream state.

Marshmallow Shield
A shield imbued with the intent to have the characteristic of causing energies or attacks to stick to, dissolve, and absorb energy that comes in contact with the shield. It is meant to resemble the characteristics of an actual marshmallow. Subcategory of Shield.

Meditation
Process of putting the mind into a relaxed and open state.

Medium
Substance through which energy is transferred, or an individual who channels outside energy or entities.

Mirror Shield
A shield that is imbued with the intent(programmed) to take on the characteristic of an actual mirror, and reflect and deflect any energies that the creator deems negative or any attacks directed towards them. Subcategory of Shield.

Near Death Experience
Specific OBE in which the individual leaves their body while it is dying, but then returns to it as their body is brought back from the brink of death.

Necromancy
Originally used to denote a type of divination using the dead. Now often refers to any of various magic/energy disciplines involving the manipulation of the dead.

Netherworld
It is the realm of the dead, and those things which coexist with them.

There are no upcoming events.

View Calendar
Add
You can also donate by clicking on the link below: https://www.paypal.me/PsionicsInstitute

© 2012-PRESENT All materials contained herein are the sole property of Psionics Institute and their respective authors. No duplications of the material on this website are allowed, without the expressed written permission of Psionics Institute Administration and the authors herein. All rights reserved.